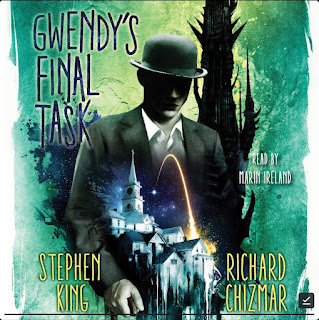 Gwendy’s Button Box is a curious trilogy of novels and novella well narrated by three different female pros. At the end of the first outing Stephen King (a longtime audiobook fan) engages with co-author Richard Chizmar about the storyline and its  writing. IT began when Stephen gave friend Richard a fragment of story and idea, and that blossomed into their collab. If it ever goes to film the logline could be: Girl is given a strange box by a strange man with dangerous buttons and two compartments which dispense mind-bending chocolates in the shape of animals, and Morgan silver dollars—all uncirculated and the same year. It’s a mashup of the movie The Box (based on the story “Button, Button” by Richard Matheson, also on The Twilight Zone) and Hellraiser (minus the demons). Add feathers and the Clooney movie Gravity and the Jim Jones documentary Truth and Lies. Writing fiction well is about telling believable lies, and King has been doing it longer and better than his one-time rival James Patterson (who I met and interviewed). In The Mist (shades of The Fog) he doesn’t explain the creatures who pop in from another dimension, except to say it has something to do with lasers operated by the military. He never cared much about science in his horror novels, although there are welcome elements of science and science fiction here.

So there’s no explanation of the deadly box with multiple buttons that can inexplicably cause random havoc around the world, or not. (Jonestown and the Pyramids are two, the time setting chosen for the first). You probably won’t care about explanations, either, although it may leave you wondering, regardless. The writing is astonishingly good, and never loses your attention, using the techniques honed by both writers over the years, ever since King’s wife retrieved his first novel out of the trash, and Chizmar struggled writing first stories that led to his magazine Cemetery Dance. Speaking of which, my fav King movie was the newer Pet Sematary, which I saw alone in the theater on day one (as I did with Avatar) and led to my book of stories Cat on a Cold Tin Roof. It is my second favorite horror film (IT third), the first being Dark Night of the Scarecrow, a little known made-for-TV gem featuring a postal carrier with a gun. (Am writing a first and last memoir about my 22 years in the USPS and 25 years in the audiobook industry).  Gwendy is followed much of her life through time and political career, and from small town Castle Rock, Maine (near where King lives) to… Read on. Or Listen Up. (Audiofile offices are in Maine).

Gwendy’s Button Box and sequels resonated with me on many levels, especially the final book Gwendy’s Final Task, as I recall being in Daytona Beach as a child, and much later in Ormond Beach to experience the floods and endless rains of the “Sunshine State.” What a nightmare that was! For more nightmares read Chizmar’s The Boogeyman, and my own Awakening Storm. 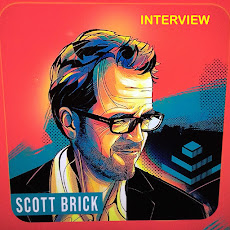